Recently I discovered SharpKit whilst looking at an online IDE called CodeRun.

SharpKit is described as “a Web Toolkit that enables you to write C# and convert it to JavaScript during compilation.”

There are a number of other similar tools around that try and achieve the goal of writing in a Static language and then converting it to JavaScript.

Some of those include:

I can’t speak for jsc or Script # but I’ve had a good look at GWT and although I can see the benefits it reminded me a bit of the ASP.NET WebForms model in that the high level of abstraction has a big learning curve.

This is the first time I have tried SharpKit so I’m going to do a very simple walkthrough and how to get started.

As SharpKit is a commercial product they require you to Register before Downloading, but don’t be put off by this.

After installing you will get the following folders.

The Samples folder contains really good examples of each project type so is the best way to get started.

In my ignorance I assumed that you could just reference the DLLs and away you go, however this was an incorrect assumption. You actually have to use one of the SharpKit Visual Studio project templates.

I really don’t like this and would expect that there should be a Command-Line interface that you can call in the Post-Build event to do the conversion. Correct me if I’m wrong but I couldn’t find any such Utility. 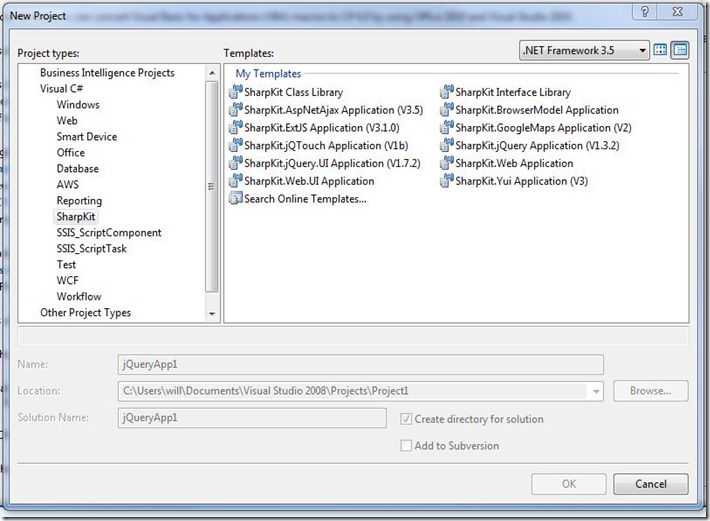 When you create a class that you want to be exported to JavaScript you have to annotate it with the JsType attribute. This defines how you want the Class to be converted at Build-Time.

There are 4 distinct modes you can use

If you want to use jQuery then you need to inherit from jQueryContext.

The other 3rd party libraries following the same pattern and inheriting a base class.

Below is a simple example:

As you can see that you have to specify the physical name of the file in the JSType Attribute and the file will be generated relative to where the CSharp file is located.

The generated JavaScript for the above class looks like this:

The code that’s generated is of a high standard. There’s not much else to show you on this as it’s fairly self-explanatory, check out the How-Tos for more detailed information.

Whilst you can use SharpKit to write raw JavaScript there’s not a lot of point these days with so many great libraries around.

SharpKit comes with very comprehensive support for Libraries and currently supports the follwing:

It’s yet to be seen how they manage to keep up with library changes.

At the time of writing they have a Freemium pricing model.


Having a free version is good but if you’re considering a Tool of this sort at all then it’s likely you’re doing some heavy JavaScript development so will very quickly go over 1000 LOC.

At $649 I think it is pretty good value, however it would likely be too much for lone developers or Open Source projects.
What would be nice is an Open Source Project License which is heavily discounted or better yet free. This could be combined with an affiliate badge linking back to SharpKit that you need to display on your website, similar to Kentico.

All in all I was pretty impressed with this Tool and it shows great promise. Here’s what I think are good about it:

However there were a few things I do not like about it.

As a Software Architect I’ve never been able to decide on the best way for JavaScript to be organized in Web Projects and usually leave it up to the Lead Web Developer who’s going to be working with it on a daily basis.

However this inevitably leads to lot’s of scattered JavaScript throughout the project and it quickly becomes a maintenance headache.

So to me the idea of writing C# and have it converted to JavaScript at build-time is very attractive indeed from both a maintenance and testability point of view. However I’m thinking that in practice it’s only really going to help .NET Developers with basic JavaScript knowledge as more advanced JavaScript developers would feel highly constrained by losing the Dynamic goodness of the language.

For those reasons I’m not entirely sold on SharpKit and similar tools just yet, however it’s definitely worth investigating further and I’m probably going to use this on the next piece of non-trivial JavaScript that needs writing.
Stay tuned for more on that.

I’m keen to know your thoughts on this and similar tools, so feel free to comment.

Popular posts from this blog

By Will Beattie February 24, 2020
Many people believe Progressive Web Apps (PWAs) are the future of the mobile web, but in my opinion, PWAs are not a replacement for native mobile apps. Here are three reasons why: 1. Native mobile apps provide a smoother & faster experience  Mobile websites, progressive or otherwise are slower and not as smooth. 90% of the time spent is spent using apps vs the browser . The single most significant contributing factor to a smooth experience on mobile is the speed of the network and latency of the data downloaded and uploaded. When you visit websites on desktop or mobile, there is a lot of third-party code/data that gets downloaded to your device, which more often than not has zero impact on the user experience. This includes: CSS (Cascading Style Sheets) JavaScript Ad network code Facebook tracking code Google tracking code The median number of requests a mobile website makes is a shocking  69 . On the other hand, native apps only get the data that is requi
Read more

Consuming the SSRS ReportExecutionService from a .NET Client

By Will Beattie November 23, 2010
I’ve just finished writing a nice wrapper which internally calls the SSRS ReportExecutionService to generate reports. Whilst it was fairly simple to implement there has been some major changes between 2005 and 2008 and the majority of online and documentation is based on the 2005 implementation. The most important change is that the Report Server and Report Manager are no longer hosted in IIS which will be a welcomed change to Sys Admins but makes the security model and hosting model vastly different. So far I’ve yet to figure out how to allow Anonymous Access, if anyone knows how to do this leave a comment and it will be most appreciated. Getting Started To get started you’ll want to add a service reference to http://localhost/ReportServer_SQL2008/ReportExecution2005.asmx where ReportServer_SQL2008 is the name you configure in the Reporting Services Configuration Manager. The Web Application files are located in C:\Program Files\Microsoft SQL Server\MSRS10.SQL2008\R
Read more