The role of Mocking in TDD, Test First with Rhino Mocks, KandaAlpha

Recently I got into a healthy discussion with Keith Patton about Constructor Injection and other such topics to do with Test Driven and Domain Driven Design.

One way or another this lead to the birth of Kanda Alpha with the goal of demonstrating best practice domain driven design utilising Visual Studio 2010 Beta, ASP.NET MVC 1.0 and Db4o as the data store.

I’ve decided to give an explanation as to the benefits of Mocking and the Test First approach.

Mocking quite simply allows you to test components in isolation from their dependencies. By mocking out the results and behaviour of the dependent components you can focus on verifying the behaviour of a single class.

Where I’ve found it most useful is in designing the service layer and this is usually the first thing I design after hashing out the Domain Entities.

There has also been some comments on Keith’s blog about the purpose of the Service layer if all it is doing is acting as a Facade to the Repository. This is a valid point and I’m going to try and give a real life example which demonstrates that this isn’t the case.

“A Service Layer defines an application's boundary [Cockburn PloP] and its set of available operations from the perspective of interfacing client layers. It encapsulates the application's business logic, controlling transactions and coordinating responses in the implementation of its operations.”

Second only to the Entities Model the Service Layer is the heart of your application so should be the focus of the design and that’s where Mocking will add value.

The example I’m going to demonstrate is the very simple but very common Registration of a User.

When a User is created there are a number of requirements that need to be met:

Right so let’s see some code.

Firstly I will define the IRegistration interface 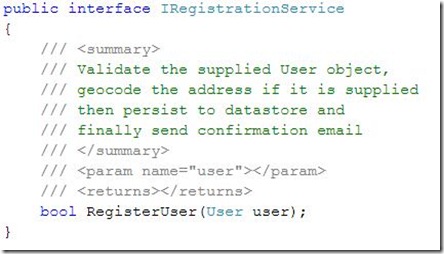 Ok as we are doing Test first let’s create an Implementation and set up our first Unit Test.

Now the Mocking framework of choice is Rhino.Mocks.

So here is the very first Unit Test. 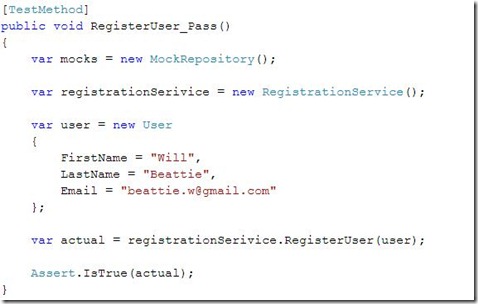 Note this test will fail as RegisterUser has not been implemented yet, this is fine as it is failing for a very valid reason.

Because of the requirements listed above the IRegistrationService implementation is going to have dependencies on some other components to fulfil these requirements.

So let’s define those

Now we will define the IUserRepository which will be used  to persist the User. 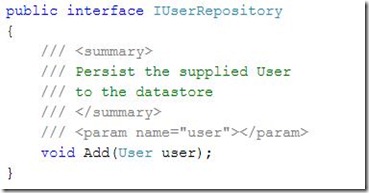 Finally we need a component to send the confirmation email.

Ok now that we have defined the Interfaces for our dependencies, let’s add them to our RegistrationService implementation. For this I am going to use Constructor Injection (link here) it will become clear shortly why. Now that we have obviously broken our test  because there is no longer a default constructor.  So let’s fix up our test so that it runs again. 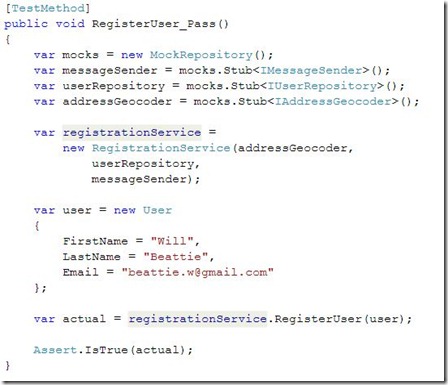 You will notice above that I have used the MockRepository to generate in-memory Stubs. We do this because we don’t want to worry about the implementations at this stage.

Now we need to Setup some results. 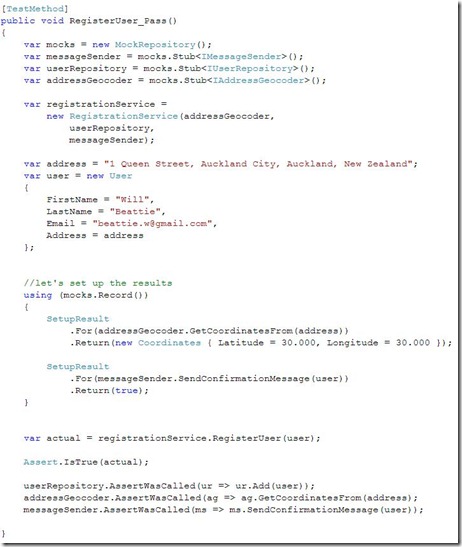 Now that we have setup our test we can write the implementation, which should be easy. 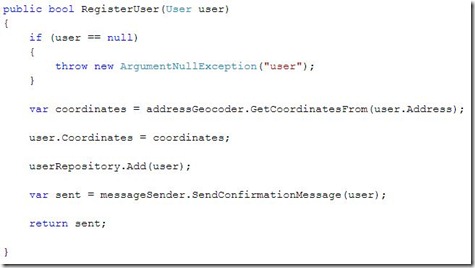 Now running the test should give us the all important green tick.

Well that’s it. By following this approach you are forced to think about how classes interact with other classes and as a result you end up with loosely coupled components that are Unit Testable.

The source code is available to on the KandaAlpha project on Codeplex.

Popular posts from this blog

By Will Beattie February 24, 2020
Many people believe Progressive Web Apps (PWAs) are the future of the mobile web, but in my opinion, PWAs are not a replacement for native mobile apps. Here are three reasons why: 1. Native mobile apps provide a smoother & faster experience  Mobile websites, progressive or otherwise are slower and not as smooth. 90% of the time spent is spent using apps vs the browser . The single most significant contributing factor to a smooth experience on mobile is the speed of the network and latency of the data downloaded and uploaded. When you visit websites on desktop or mobile, there is a lot of third-party code/data that gets downloaded to your device, which more often than not has zero impact on the user experience. This includes: CSS (Cascading Style Sheets) JavaScript Ad network code Facebook tracking code Google tracking code The median number of requests a mobile website makes is a shocking  69 . On the other hand, native apps only get the data that is requi
Read more

Consuming the SSRS ReportExecutionService from a .NET Client

By Will Beattie November 23, 2010
I’ve just finished writing a nice wrapper which internally calls the SSRS ReportExecutionService to generate reports. Whilst it was fairly simple to implement there has been some major changes between 2005 and 2008 and the majority of online and documentation is based on the 2005 implementation. The most important change is that the Report Server and Report Manager are no longer hosted in IIS which will be a welcomed change to Sys Admins but makes the security model and hosting model vastly different. So far I’ve yet to figure out how to allow Anonymous Access, if anyone knows how to do this leave a comment and it will be most appreciated. Getting Started To get started you’ll want to add a service reference to http://localhost/ReportServer_SQL2008/ReportExecution2005.asmx where ReportServer_SQL2008 is the name you configure in the Reporting Services Configuration Manager. The Web Application files are located in C:\Program Files\Microsoft SQL Server\MSRS10.SQL2008\R
Read more